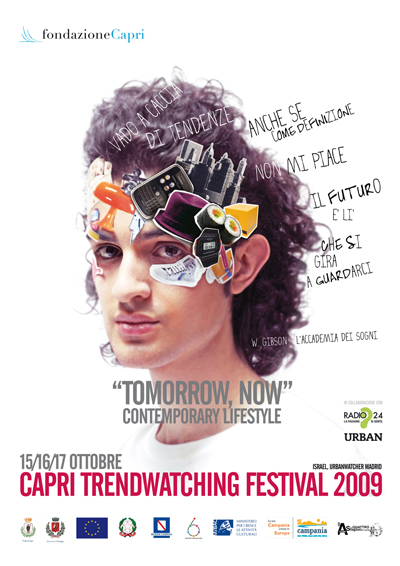 Capri, September 1st, 2009 – How are future lifestyles gong to be? How much of what is taking place today in the world of fashion, design, urban projects, technology will change our life and consumption behaviours? These are some of the answers a number of businessmen, architects, fashion designers, artists, intellectuals and trend forecasters will try to answer at the first edition of Capri Trendwatching Festival which will be held in Capri from October 15th to 17th 2009.

From the trend guru Li Edelkoort to the sci-fi author Bruce Sterling, from the avant-garde designer Walter Van Beirendonck to the ethical entrepreneur Marco Roveda, from the sustainably committed architect Mario Cucinella to the photographer and film director Francesco Jodice, to the streetstyle anthropologist Ted Polhemus: for three days, Capri – a place par excellence for a learned and erudite reflexion, a space for imagination and intellectual design – will be the ideal meeting point for anybody who will want to discuss the present to sketch the outlines of the future.

With the support of the Capri Foundation, this year’s edition of the Festival will be devoted to emergent trends in lifestyles and will be developing over a syllabus of round tables, meetings and lectures. Among the others, the festival will deal with the following issues: “Supergreen”, that is how the “green thought” and the sustainability concept are redefining behaviours and lifestyles; “Daily Aesthetics”- taste and aesthetics as everyday activities leading to a recursive hybridization between arts, fashion and goods, adjusting to a new definition of high and low cultures – and “Urban Signs”, an overview on signals and creative behaviours which are conveying a new meaning to urban areas as places for social expression. 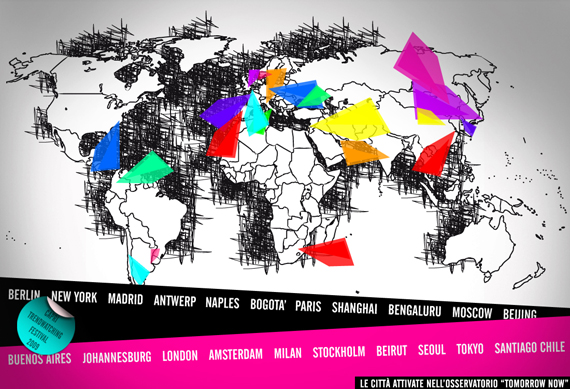 The Capri Trendwatching Festival sets out from the results of the international observatory “Tomorrow Now”, carried out through trendwatching, an ethnographic-based research method aimed at intercepting the evolution of taste and aesthetic next trends influencing social imagery which tomorrow will turn into mass phenomena. The observatory is based on the signals captured by an international field of “urbanwatchers” who have led a ground research in 20 key-cities around the world: Amsterdam, Antwerp, Bangalore, Beijing, Beirut, Berlin, Bogotá, Buenos Aires, London, Johannesburg, Madrid, Milan, Moscow, Naples, New York, Paris, Santiago de Chile, Seoul, Shanghai, Stockholm, Tokyo.

At the Capri Trendwatching Festival the results of the observatory will be on a preview display for the visitors to see by a multimedia map desk with the most innovative life style and consumption habits breaking at international level. The main evidence resulting from the observatory, shown by ways of multimedia supports, is meant as the ideal train of thought linking the different stages of the event and the outset for the Festival keyplayers to introduce their idea of future lifestyles.

Participation is free of charge and can be registered on line at the following address:  info@fondazionecapri.org

Fondazione Capri
The Capri Foundation, constituted in March 2009, sets itself as primary targets: the preservation and the promotion of the artistic, historic and landscape heritage of the island; the production and the circulation of culture across the Capri area and the education and the support of local excellence in different fields. In the will of its Founders, entrepreneurs, businessmen, hoteliers and professionals operating in Capri and Anacapri, chaired by Gianfranco Morgano and Antonio Cacace, with the patronage of Città di Capri and Comune di Anacapri and with the support of Regione Campania, the Capri Foundation’s particular mission is to involve the area and the local people as an active participant in the realization of these activities, with a view to increasing the national and international visibility of the area. What the Foundation intends to do is promote, enhance, and foster the growth of local intellectual and artistic excellence and support them by way of festivals, awards, study grants, foreign study, all standing beside local young people down their path. At the same time, the Foundation aims to promote Capri’s historic and environmental heritage towards a cultural tourism, responding to cultural offers aimed at a collaboration with both public and private, national and international bodies sharing the same objectives. The Island of Capri has been host to a number of personalities from the art, politics, economics and finance world, thus becoming a place for cultural exchange. The Capri Foundation was also born to reconfirm the Island’s vocation as an artistic and cultural workshop and a place for comparison based on the inseparable connection of tourism and culture.

Elena Marinoni
Art curator of the Capri Trendwatching Festival and of “Tomorrow Now”, the observatory the festival is based upon. As a researcher, in 2001 along with Patrizia Martello and Alessia Zampano, she founded Memi, an International Trendwatching Observatory aimed at detecting the unevenness of taste and the expression trends emerging from today imagery through hyperquality etnographical-based research techniques. As a Senior Research Consultant for GPF (Milan), a research institute and strategic consultant on social change, consumption and communication, she has developed a significant experience in the areas of design (home styles), luxury goods, teen cultural goods and advanced retailing. She collaborates in the radio show “Essere e Avere” (=”To be and to have”) on Radio 24. She is a lecturer in Sociology of Consumption and Trendwatching and in Contemporary Design.