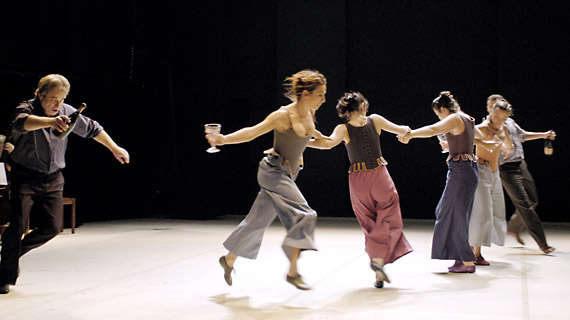 Capri, island of surprising landscapes, capable of captivating emotionally as well as esthetically, rich in natural settings that have always stimulated the imagination of architects and artists, will once again be a backdrop for Beauty. The Fondazione Capri, established in May of this year, opens its season with a grand homage to dance, a discipline that is very popular locally among the young inhabitants of the island.

Inhabiting Beauty plans to bring prominent artists to Capri and to present their performances in sites that are evocative and important in the island’s history and landscape. This first season features an homage to Carolyn Carlson: the great choreographer will perform Giotto and will present Blue Lady, one of her masterpieces, which she danced years ago and is now entrusted to a male dancer; she will also participate in a public discussion. The program concludes with Un Air de Folies, a true baroque festival, with musicians and dancers from the Fêtes Galantes company and the involvement of 10 students from the local dance school. The magnificent Certosa di San Giacomo will be the setting for these evenings. Finally, in response to intense interest on the island, public encounters, lectures and study trips will be organized, with the collaboration of dance critics and historians.

Gigi Cristoforetti
Graduate in History, has devoted himself to live performance, creating projects tied to dance, theater and the contemporary circus. From ’95 to ’98 he created and directed Echi del Mediterraneo (Echoes of the Mediterranean), an interdisciplinary festival devoted to dance, theater, music and the material culture of the countries that border the Mediterranean (different countries each year). From ’98 to 2000 he created and directed the Festival Internazionale Gardadanza. With the Festa internazionale del Circo Contemporaneo in Brescia (2000-2008), he brought this new discipline – a hybrid between dance and circus, quite widespread in Europe – to Italy for the first time. Since 2003 he has directed Torinodanza, with the goal of having the festival be included on international programming circuits.
For these various activities he has received the Premio Hystrio, the Premio dell’Associazione Critici di Teatro and the Premio Danza & Danza. He has written critical texts on dance for various publications, including some for radio and television, and he has collaborated with resident theater companies and Italian festivals.