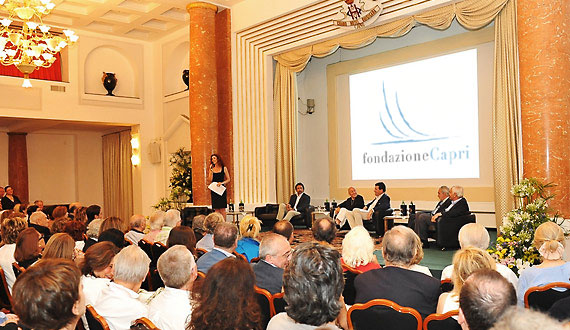 Capri’s Teatro Quisisana – May 23rd 2009, date chosen for the official presentation of the newly inaugurated Fondazione Capri. The principal aims of the foundation are: the promotion of the island’s historical, artistic and environmental heritage; the production and diffusion of culture on the territory of Capri, and the creation and financial support of local sources of excellence in various disciplines.

The founders, hoteliers, professionals, and members of the local business community of Capri and Anacapri, headed by Gianfranco Morgano and Antonio Cacace, with the participation of the town councils of Capri and Anacapri and the contribution of the Campania Region, aim to involve the territory and the local population in the realization of the Foundation’s projects, with the objective of achieving visibility on both a national and international scale. A great number of the foundation’s initiatives will focus on the younger generation of islanders; stimulating, encouraging and developing intellectual and artistic growth by way of a series of festivals, awards, grants, and opportunities to study abroad.

In this context, the foundation intends to promote the island of Capri’s historic and environmental heritage, by encouraging a form of tourism open to cultural initiatives, and the participation of public, private, national and international projects which share similar aims. For centuries, the Island of Capri has represented a place of cultural exchange, offering hospitality to members of the world of art, politics, economics and science. The Fondazione Capri has been created to further affirm the island’s position as a center of artistic exchange, based on the inseparable relationship between tourism and culture.

The photos of the event onFlickr 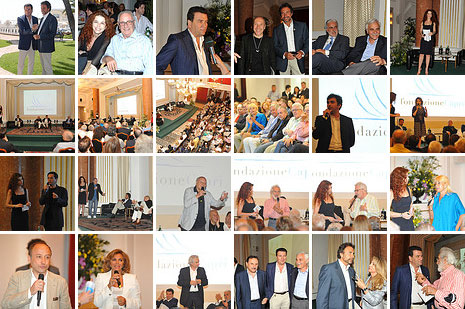 This first season’s activities include:

Dance is a cosmopolitan and contemporary language, which captures and reflects the interest of the local population, creating a special attraction for international tourism. Abitare la bellezza aims to bring artists of international renown to Capri, hosting performances in sites of great historical and environmental importance on the island. This first production includes a celebration of the career of Carolyn Carlson. The great choreographer will present ‘Giotto’, a brief, recently created, piece, and ‘Blue Lady’, a masterpiece which she danced many years ago, and which is now entrusted to a male interpretor. Carlson will participate in a meeting with the public.

The principal venue for these evenings will be the magnificent natural terrace of Damecuta. The program is completed with Un Air de Folies, a celebration in baroque style, held at the Charter house, with the participation of musicians and dancers from the Fêtes Galantes company. Finally, in response to one of the island’s greatest passions, public meetings, lessons and study journeys will be organized, with the collaboration of dance critics and historians.

Part of the exhibition Capri I Luoghi della Parola – Le parole degli dei, in collaboration with the Capri’s La Conchiglia Cultural Association. The exhibition, comprised of 150 photographs, is entirely dedicated to the German photographer Von Gloedon, the creator of world famous images exploring the relationship between man, nature and history. The exhibition is located in Villa Lysis, an early 20th century residence which belonged to the baron and poet, Jacques Fersen, an eccentric aristocrat who frequently offered hospitality to artists and intellectuals visiting or living on the island and whose villa was at the heart of great artistic, political and cultural ferment.

Travelogue, work in progress, and contemporary art in Capri. For this first phase of the project, which aims to introduce contemporary art to the younger generations, Fondazione Capri will be supporting with the Travelogue Project ‘The Journey’. In this first year the project will be made available to some 200 students, with the co-participation of the Istituto Comprensivo Vincenzo Gemito of Anacapri.

The project plans that young artists from various parts of the world will come to the island and host sculpture, painting, photography and video workshops for both students and teachers. Sandro Chia, who opened the Venice Biennale in June this year, and who is one of the principal interpretors of the international Transavanguarde, will be among the artists participating. The students will learn about the various techniques, but above all will be encouraged to express their creativity, and recount their way of seeing the world by way of their own personal journey. The project will commence in September and conclude in October with an exhibition of the work produced.

A preview of emerging trends of expression realized through a series of meetings, lectures and workshops. A two-day event which proposes a multimedia mapping of the innovative lifestyle and consumer trends emerging in 20 key cities in the world, each of which is considered an authentic trend incubator. The various stages of the event will be linked by the results of international research using trend-watching, a form of ethnographic matrix, capable of intercepting aesthetic trends in contemporary society and the discontinuity of taste.