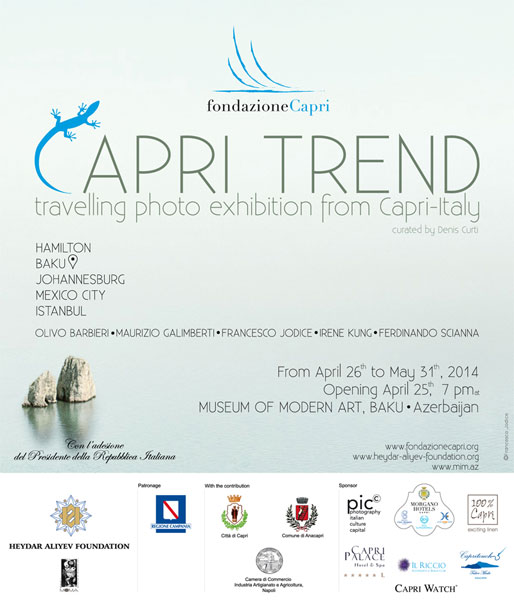 The Capri Foundation, is glad to announce the collaboration with the Heydar Aliyev Foundation and the Museum of Modern Art in Baku. One of the most important museum of painting and sculpture of Azerbaijan avant-guardists from 2nd half of the 20th century up to now.

The Capri Foundation was founded in 2009 by a group of entrepreneur and local authorities to promote culture of Capri Island. After five years of activities devoted to culture, contemporary art, contemporary photography, contemporary dance and a, Capri Trendwatching Festival, that sketch the outlines of the next future through research data, case histories, workshops and open lectures.

The Heydar Aliyev Foundation have started its activity since 2004, participating in building a new society and contributing to the social and economic development of the Azerbaijan, by implementing various projects in spheres such as education, public health, culture, sports, science and technology, environment, and social and other spheres

The Capri Foundation will present the first exhibition Capri Trend, an exhibition that celebrate the five years of its activity, presented in five different countries. The exhibition includes some of the most italian photographers Ferdinando Scianna. Olivo Barbieri, Maurizio Galimberti, Francesco Jodice, Irene Kung. The exhibition will include about 30 photographs to promote the Capri culture and beauty abroad with an authorial and contemporary sight.

Next Venues of the exhibition Capri Trend: